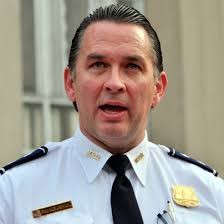 Following a nationwide search, along with a community survey and an interview process that included input from a panel of community leaders from a diverse range of organizations and backgrounds, the Prince William Board of County Supervisors has selected Peter Newsham as the County’s new Police Chief. His expected start date is February 1, 2021.

Newsham is currently the Chief of Police of the Metropolitan Police Department in Washington, D.C., and has held that position since 2017. Under his leadership, MPD instituted a diversity and inclusivity training program for its recruits, sworn officers and civilian employees. He also oversaw successful efforts to diversify the force.

“Diversity comes in many forms, and our communities are best served when we embrace new ideas and fresh perspectives. The Board’s recent decision to appoint Peter Newsham as the next Chief of the Prince William County Police Department marks the first time in the department’s history that the chief will be an outside hire,” said Supervisor Boddye. “Chief Newsham is a proven leader who has a track record for building a law enforcement agency which reflects the diversity of the community it serves, and that experience will be pivotal in ensuring the next fifty years of our police department’s history will be even stronger than the first.”

“We are happy to welcome Chief Newsham and the level of expertise he brings to the position,” said Prince William County Executive Chris Martino.

Chief Newsham earned a bachelor’s degree in Political Science from the College of Holy Cross, and a Juris Doctorate from the University of Maryland School of Law. He is a member of the Maryland Bar. He has attended numerous police executive trainings and seminars and is actively involved in the Major Cities Chief’s Association and the Police Executive Research Forum. Additionally, he has attended the Anti-Defamation League’s (ADL) training on Law and Society, and the ADL’s National Counter-Terrorism Seminar in Israel.

“Chief Newsham brings a wealth of experience and leadership to this position,” said Prince William Board of County Supervisors Chair-At-Large Ann Wheeler.

Washington, D.C., is a community of over 705,000 residents within 68 square miles and a Police Department of 4,500 total employees. Chief Newsham was selected as the top-ranked candidate after a national recruitment process, administered by recruiter GovHR USA. The County received 50 applications from 16 states and Washington, D.C. Chief Newsham distinguished himself throughout the intensive recruitment and vetting process.

“I am excited to join the team and look forward to making a difference in the community,” said Chief Newsham.