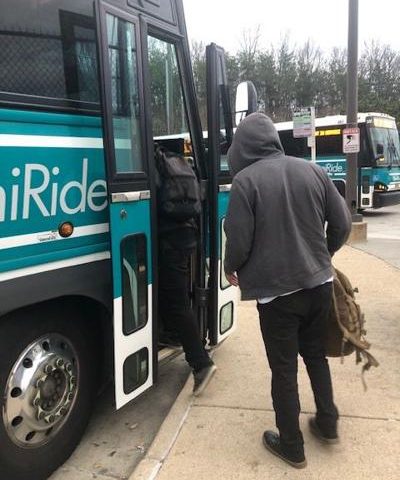 Some of Prince William’s most vulnerable residents had a new place to sleep last night.

About four dozen homeless people who had been staying at the county’s overnight shelter were transferred to a larger space the A.J. Ferlazzo Building, while some chronically ill homeless residents were temporarily housed in a local hotel.

The changes are part of the county’s effort to enforce “social distancing” in buildings and facilities amid the ongoing coronavirus pandemic. “I’m excited that we’ve moved them into a bigger space where they’re more protected,” said Rose Powers, executive director of StreetLight Community Ministries, which operates the shelter for the county.

The emergency overnight shelter, located in a modest, house-sized building off Telegraph Road in Woodbridge, has a usual capacity of 48 people. But the space is tight, and keeping homeless clients 6 feet apart there was impossible.

That’s why StreetLight made finding a bigger space a priority this week. With the help of the county’s Department of Social Services, as well as public works and several homeless residents themselves who pitched in to help, StreetLight relocated the overnight shelter  to the Ferlazzo gymnasium Thursday night.

It was no small task. The move required pulling cots out of county storage; setting up partitions; transferring linens, blankets, tables, chairs, food and supplies; and outfitting the gymnasium with extra power, computers and cable TV, Powers said. But the work was accomplished in just two days’ time.  “It was really the county that rose to the occasion to get it all done,” Powers said. Even better, Powers said, is that StreetLight Ministries’ donors raised enough money in 24 hours to pay for hotel rooms for six of the shelter’s most vulnerable clients — all older residents with chronic health conditions. Powers put out an appeal for donations on StreetLight’s Facebook page Thursday morning. By 5 p.m., about $1,100 had come in — enough to keep the medically fragile clients in hotel rooms for the next few days.

StreetLight hopes to raise about $10,000 more, which would be enough to provide hotel rooms for the next month for its chronically ill and elderly homeless clients who should not be in a shelter environment during the coronavirus pandemic.

“One man can hardly walk a few steps before he is so exhausted and out of breath that he has to sit down and rest. Another woman uses a walker. All seven are very weak,” Powers wrote in her Facebook post.One of the men Powers had hoped to house in a hotel did not show up at the shelter Thursday night. But the other six were grateful for the offer of a hotel stay, Powers said.

“One woman was so panicked” about staying in the shelter amid the coronavirus pandemic, Powers said. “She was in tears when she found out she was going into a hotel. … They couldn’t stop thanking me. They were very, very grateful.”