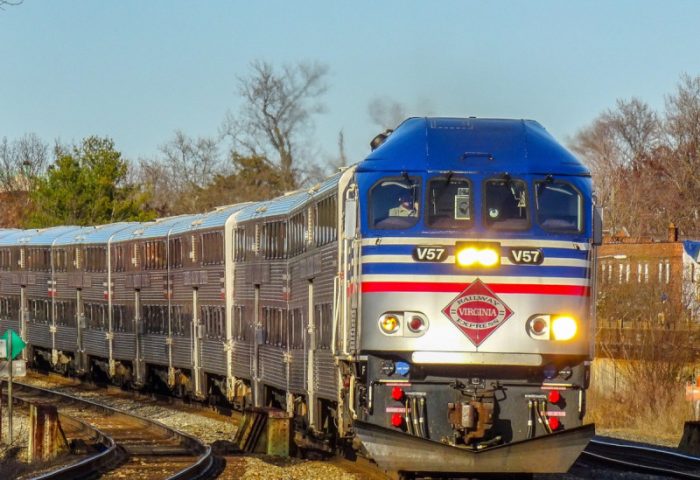 The Virginia Railway Express (VRE), having successfully closed a public bond sale on June 28, will make a significant financial contribution to the Transforming Rail in Virginia (TRV) program. The commuter rail service will use $119.2 million of the bond proceeds to support the commonwealth’s purchase of rail right-of -way in the Interstate 95 corridor from CSX Transportation. The acquisition is essential to making possible the expansion of VRE service – to include off-peak, evening and weekend trains.
“As a major beneficiary of Transforming Rail in Virginia, VRE has worked to identify opportunities to support this important initiative,” said VRE CEO Rich Dalton. “In addition to funds from the bond issuance, VRE will contribute another $75 million over the next 10 years on a pay-as-you-go basis, bringing our total financial support to nearly $195 million.”
These funds will go to the Virginia Passenger Rail Authority (VPRA), which manages the $4 billion TRV program.
“Huge swaths of our workforce operate outside of the 9-t0-5, white-collar business model. Expanding our existing rail service can make it a viable commuting option for those working as caregivers, in the service industry, and doing shiftwork, said Occoquan District Supervisor Kenny Boddye, who sits on the PRTC/OmniRide Board of Directors. “By offering a ‘reverse commute’ and weekend travel options, it can also become an economic driver that helps to grow our commercial tax base.”
Demand for the bonds – issued under the name of the Northern Virginia Transportation Commission (NVTC), which co-owns VRE – was strong based on double-A credit ratings and a green bond designation. Green bonds fund projects with environmental benefits – and increased usage of intercity passenger rail service can help to reduce future emissions of greenhouse gases and particulates and encourage the development of compact communities that promote walkability.
The bonds are backed by revenues from the Commuter Rail Operating and Capital (CROC) Fund. Created by the General Assembly in 2018, the CROC Fund receives $15 million annually from motor fuels tax revenues collected in the jurisdictions represented on VRE’s two parent commissions, NVTC and the Potomac and Rappahannock Transportation Commission. The final maturity date for the entire bond series is June 1, 2052. VRE’s additional $75 million contribution to TRV also will come from the CROC Fund.
Beyond these financial contributions, VRE will support TRV through station and rail infrastructure improvements. Its $1.1 billion capital improvements program is more than two-thirds funded. Among the projects are those that would lengthen existing and build new platforms to accommodate longer trains and allow for the simultaneous boarding of two trains at a station. VRE, the nation’s 13th largest commuter rail service, connects Central and Northern Virginia with the District of Columbia. Its two lines, Manassas and Fredericksburg, serve 19 stations, including two – L’Enfant and Union Station – in D.C. Additional information is available at https://www.vre.org.

Related: Could the Virginia Railway Express operate more like a second Metro?