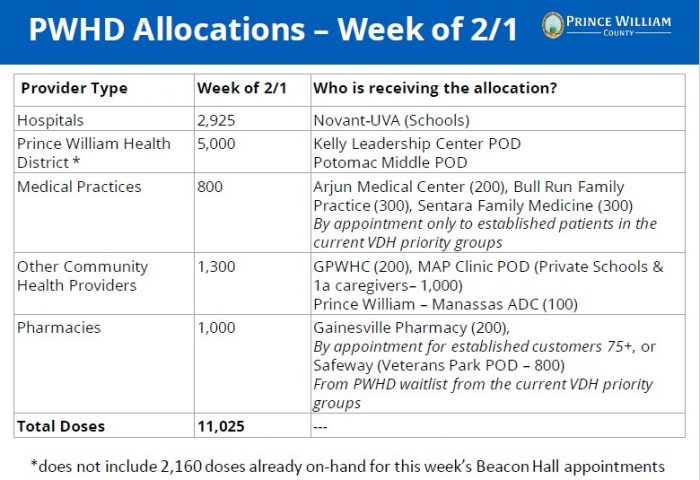 In his Feb. 2 presentation to the Board, PWC Emergency Management Coordinator Brian Misner discussed the challenges that followed a chaotic federal rollout of the vaccination program in December, and steps the Prince William Health District and County have taken to overcome these as it integrates new changes to federal and state processes.

The County continues to vaccinate residents in groups 1a and select portions for 1b. If you are in these groups and have not done so already, click here to join the waitlist. It could take several weeks until you are contacted for scheduling. The Health District is only scheduling up to 7 days in advance, and as supplies become available, for maximum efficiency. It will take several months to complete vaccinations of these groups. The percent positivity for tests in Prince William is 13.5% as of Jan. 28; this is trending downward. Hospitals across Northern Virginia have available capacity and Virginia now ranks 11th in terms of vaccine distribution. (Initial reporting errors caused lower initial rankings. See other key points from the presentation below; you can view presentation slides here or scroll to the end of the page to watch the presentation.

The Virginia Department of Health (VDH) required health districts to use the Vaccine Administration and Management System (VAMS) that was developed by the Federal Center for Disease Control (CDC).

VAMS had several issues with scheduling appointments leading to confusion and frustration among residents. One such is was that VAMS did not distinguish between first and second dose appointments. On January 15th, when there was determined to be a shortage of vaccine supply, particularly for second doses, the Prince William Health District (PWDH) immediately turned off GMU Beacon Hall appointment availability beyond 2/15 to preserve capacity for second doses.

On January 12th, VDH announced PrepMod, would be replacing VAMS. Training for PrepMod would not begin until January 28th. On January 19th, the PWHD was notified PrepMod’s live date would be February 8th.

To bridge this gap between appointment systems, on January 15th, the PWHD asked PWC government to help with manual booking to accommodate second doses and first doses from the waitlist as capacity was available.

As of January 28th, there were 17,692 records added to VAMS that have appointments or are ready to be scheduled. As of February 1, there are 41,443 unique records on the unified waiting list.

All of the locations managed by the Prince William Health District require an appointment. For the week of 2/1, GMU Beacon Hall, Potomac Middle School, the Kelly Leadership Center, and Veterans Park are being managed by the PWHD. In addition, health care systems (NOVANT, Sentara, Kaiser) and independent providers (Greater Prince William Health Center, Masons and Partners Clinic) are also administering vaccines through appointments. They are vaccinating existing patients and/or working with the unified waitlist managed by the PWHD.

Allocation of doses was previously managed through VDH while the PWHD ordered the doses. The two pronged approach meant that the health district and private providers were receiving their own supply of doses from the state. VDH has changed this process and all doses are now being directly managed through the PWHD.

The current priority is:

A new facility on the west end of the County will be opened during the week of 2/8 which will eventually replace the GMU Beacon Hall location as it will have greater capacity. During the week of 2/22 a large capacity east end facility will be opened mainly to handle second doses. The goal is to begin March with two large facilities that each are able to deliver 30 doses every 10 minutes.

It will take months to get through the current priority groups at the current rate of supply. Until supply increases, including new vaccine candidates receiving Emergency Use Authorization from the US Food and Drug Administration, it will not be possible to host open first come, first serve clinics.

Our office became aware of a first come, first serve clinic that took place in Manassas Park last weekend. The supply of vaccines used in this clinic was acquired by the Mason and Partners (MAP) Clinic, an independent health care provider. The MAP Clinic received these doses from a healthcare system that had more supply than it needed and was given directly to the MAP Clinic to administer. At this time, the MAP Clinic has resumed vaccinating through the unified waitlist through its existing patients as well as phase 1a care givers and private school staff.