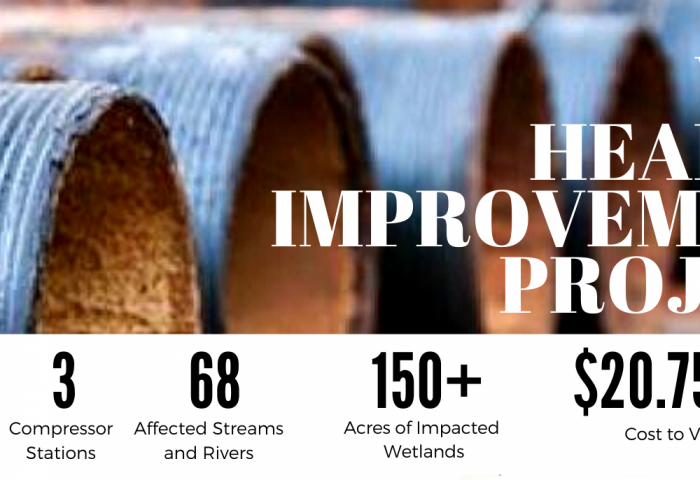 The State Corporation Commission (SCC) extended the public comment period for the Header Improvement Project through Friday, May 22, 2020. This 24 mile network of fracking pipelines will cross through a number of local waterways, including the Occoquan Reservoir Intake, a major drinking water source for all of Northern Virginia. Prince William area residents and affected business owners are encouraged to share their concerns with the SCC online.

Slated to be operational by late 2022, the project calls for three new pipelines spanning Northern Virginia, Central Virginia and Hampton Roads. The project would connect and run parallel with existing pipelines throughout Northern Virginia, crossing a number of our waterways including Cedar Creek, Cedar Run, Slate Run and Town Run, and more than a dozen unnamed streams. Sierra Club estimates that in total, the project will impact 68 waterways and 150 acres of waterways across Virginia.

The new pipelines would be accompanied by the addition of the Transco Interconnect Compressor Station in Prince William County, an expansion on the existing Ladysmith Compressor Station in Caroline County, and a new compressor station in the existing Gidley Gate Metering and Regulation Station in the City of Chesapeake. The total estimated cost of the Header Improvement project is $346 million, 6 percent of which will be financed by VNG’s customers via base rates.

“The [project] will inevitably result in gas leaks and could significantly affect 38 acres of farmland, 83 acres of forestland, and 27.5 acres of wetlands that is within a 100-foot radius of this project in Prince William county,” said Prince William County Soil & Water Conservation Director Tiziana Bottino, during her SCC testimony. “Methane gas leaks can significantly affect soil health and could result in plant decline and even death. Considering another fossil-fuel pipeline, the Transco Southeastern Trail Expansion’s Manassas Loop, is also cutting through a significant amount of farmland and perhaps overlapping wetlands with this project, it’s hard to ignore the potentially negative cumulative impacts that could result from two major pipeline projects in the same area.”

In addition to submitting comments to the SCC through May 22, read this Sierra Club article for other ways to get involved, ranging from writing letters to the editor to sharing information with friends and family.