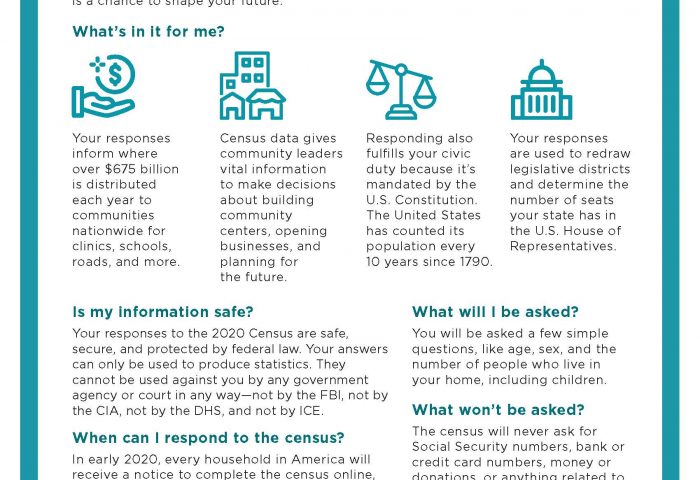 The 2020 Census is quickly approaching, and Prince William County wants its residents to know how important it is that everyone is counted. Prince William County Demographer Brian Engelmann recently gave a presentation to the Board of County Supervisors to explain what the county is doing to get an accurate 2020 Census count, so that it receives its fair share of federal funding and congressional representation.

Engelmann estimates that for every person not counted, the county could miss out on approximately $21,120 in federal funding over the next 10 years. Federal funding that is dependent on census data includes money for programs such as Medicaid, Medicare Part B, highway construction, Section 8 housing vouchers, special education grants, the State Children’s Health Insurance Program, Title 1 grants to local schools, the School Lunch Program, Head Start, the Women with Infants and Children program, foster care and more. Census data also determines how many lawmakers the state sends to the U.S. House of Representatives and influences decision making at the state and local level.

The 2020 census questionnaire will be available online, by phone in many languages, and by mail. Strict federal privacy laws guarantee the confidentiality of all responses. The Census Bureau will begin inviting households to take the 2020 census in the middle of March and will continue follow-up to nonresponsive households until the end of July.

Leading up to and throughout census time, the county will work toward making sure that a complete count is achieved by distributing promotional materials, training volunteers to help raise awareness about the Census, running a social media campaign and recruiting Census volunteers to work at area libraries and senior centers to disseminate Census information, Engelmann said.

Outreach volunteers, aided by U.S. Census personnel, will be at several county libraries on upcoming Saturdays to get the word out about the Census, Engelmann said. “Libraries will be heavily involved in having ‘Census Saturdays!’ at six of our libraries during that critical time period from March 14 through April 11.”

In addition, the Woodbridge campus of Northern Virginia Community College will hold World Census Day on Wednesday, April 1, from noon to 4 p.m. that involves live music, free food from local food trucks, census takeaways and opportunities to take the census.

The county is also turning to a committee of outreach partners that includes the Community Foundation of Northern Virginia, the Potomac Health Foundation, the League of Women Voters, ACTS, HOLA, the Prince William County NAACP, the Cooperative Council of Ministries, non-profits and faith-based organizations for help in stressing the importance of the Census and building trust in the hard to count areas. Hard to count areas are areas identified by the Census that are historically undercounted due to language barriers and lack of trust that the Census data is confidential.

Engelmann said the outreach partners will be instrumental in getting the word out about the Census. “This is our major push to get in touch with trusted voices in our community whether it is a business, whether it is a faith-based organization… Whether it’s getting a blurb in a newsletter that folks read, or simply hearing from a community leader, these are probably some of the best conduits for Census awareness.”

In addition, Engelmann said, the Prince William County Department of Housing and Community Development staff will distribute Census information in communities that receive federal housing subsidies, since those areas are typically undercounted in the Census. “We need to utilize those people that are working with those segments to get the word out and to build trust about the Census.”

Signs promoting the Census, at 14 Virginia Department of Transportation park-and-ride lots across the county, will also help spread the word, Engelmann said. “The county sends 64 percent of its workers outside the county for commuting, so the signs at the commuter lots should be particularly effective. These are great places to get eyes on Census materials.”

Engelmann said he hopes to coordinate with county schools to incorporate Census lessons into history and social science classes in selected grade levels. The county will also help the U.S. Census Bureau in counting residents in county homeless shelters as well as transient populations, Engelmann said.

Other opportunities to promote the Census would include buying advertising in local and regional target markets such as Virginia Railway Express, or VRE, stations, VRE rail cars and Potomac Rappahannock Transportation Commission Omnilink buses. Google, radio and print advertisements could also be used to promote the Census, Engelmann said.

The information people give to the Census stays with the Census. “We want people to know that the information they provide on the Census is confidential, and it is critical in order for the county to get the amount of federal funding it needs,” said Engelmann. “Every person in the county truly does count.”

Information about the Census and the county’s efforts to get an accurate count is available at pwcgov.org/census. People who are interested in a Census job may apply at  https://2020census.gov/jobs.