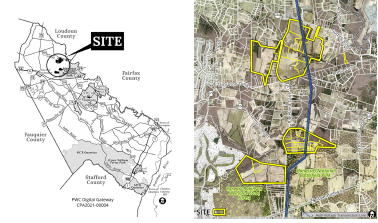 A Message From Supervisor Boddye…

During a recent Board meeting, were again reminded that Prince William is a community that cares deeply about the balance between progress and preservation, with three hours of Public Comment Time centered on whether we should initiate a Comprehensive Plan Amendment (CPA) for the “Prince William Digital Gateway.” A little over half of the County residents who spoke urged approval of the initiation; all who spoke were impassioned. Following this testimony and extensive deliberation, the Board voted in favor of initiating the CPAs for the Digital Gateway (Pageland Lane in Gainesville) and the Compton Property in Manassas.

Following an amendment that I offered, the study will look at the entirety of the corridor, from Route 29 to Sudley Road. This encompasses the areas along and around Pageland and Compton, as well as a data center project at Gainesville Crossing approved by the prior Board, addressing concerns about impacts on the surrounding neighborhoods and environmental resources.

I also heard – and support – those who spoke of the need for sensitivity towards the Conway Robinson State Park and Manassas Battlefield, which are adjacent to Pageland Lane and parts of Gainesville Crossing. To that end, I directed staff to examine native plant buffering, alternative land use designations for protecting environmental resources, and open space strategies that could provide options for transforming Pageland Lane into an Open Space Corridor, striking that balance between progress and preservation.

These CPAs, which will be studied in tandem with the Data Center Overlay and Design Standards Zoning Text Amendment, will include commitments made as part of that larger study. Study results will include recommendations for improved data commercial design standards, sustainability and green infrastructure guidelines, and achieving environmental justice principles. Although the Pageland landowners have requested the “tech flex” designation, staff will be looking beyond data centers as they consider the highest and best use for that area.

The desire to keep things as they have been is natural and understandable. But the reality is that the change has already started. The Pageland area has been bisected by high-tension power lines and a gas pipeline runs under the land that was once the family farm for many of the Digital Gateway applicants. Without this CPA, Pageland would likely be divided into 80 estates on 10-acre lots by-right, with the potential to have more homes added under the family subdivision provision, which requires no mitigation of impacts to the surrounding area.

The question now becomes: how can we manage that change to create the best outcomes for our community moving forward? The results of this CPA initiation will provide us with data as we consider the answer. I look forward to reviewing the findings with the public and my colleagues on the Board in coming months.