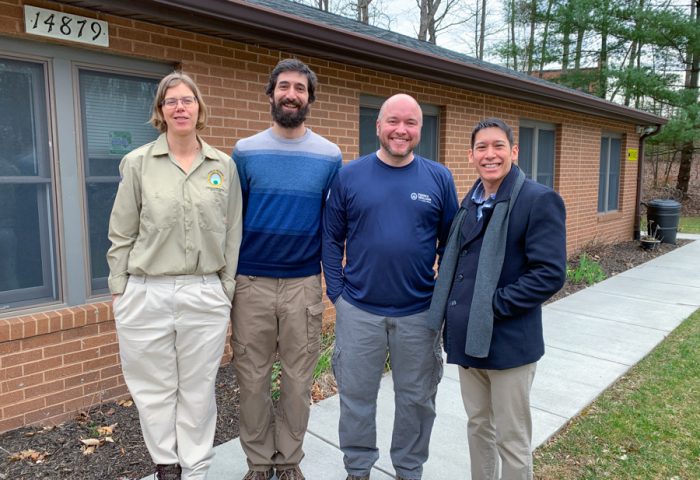 Note: This article uses image carousels. To view all the images in a carousel, please click on the round dots below the carousel.

Driving past the County Landfill, one might not notice a road obscured by trees. Along this road, tucked away in a narrow parking lot lies an unassuming building filled with insect samples and staff passionate about researching and controlling their populations. These 13 people are the County’s Mosquito and Forest Pest Management team.

The Mosquito and Forest Pest Management team is tasked with monitoring and controlling pest populations that are identified as part of ordinances dating as far back as 1992. Prior to the establishment of this branch of the Environmental Services Division in the Department of Public Works, the Virginia Cooperative Extension was responsible for pest management in Prince William County. Along with the Cooperative Extension, the Virginia Department of Agriculture and Consumer Services (VDACS) and the US Department of Agriculture continue to be valuable resources and partners.

As information becomes available from partnering agencies, the local programs adapt and evolve over time which may involve managing more species and changing how the County controls pests.

“The program, truly, the field as a whole has changed dramatically over the past 20 years,” noted Valerie Huelsman, Program Specialist for the branch. In reference to mosquito spray trucks that were seen around the County in the late 1990s, Huelsman explained, “That was a very different program. We focus heavily on larvae surveillance and control which is more effective and has less impact on the environment. Today we use a biological larvicide which is organic bacteria that is present in the soil.”

The team at Mosquito and Forest Pest Management carries out their mission by mainly focusing on monitoring the target pests. The health and safety of the County residents is a top concern for the branch along with preserving plant species and managing damage to property and the environment.

The team studies mosquito populations particularly those that can carry disease (also called vectors). To do this, they capture mosquitos using three different kinds of traps. During mosquito season, there could be upwards of 60 traps throughout the County. The traps are inspected weekly and the contents are sorted through. In a single season, they can process around 120,000 mosquitos. The field biologists focus on female mosquitos as they are the only ones who take a blood meal. Two species they especially monitor are the Northern House mosquitos, identified as the primary vectors for West Nile, and Asian Tiger mosquitos. The latter are aggressive day time biters and can breed in artificial containers (such as a tire with a little bit of water inside of it) which increases the risk factor for transmitting West Nile enough though they are not the primary vectors.

As part of processing, as many as 50 mosquitos are placed inside a single vial which is shipped to George Mason University Biodefense Lab for testing. The mosquitos are tested mainly for West Nile virus (and Zika during the outbreaks in 2015 and 2016), but the team also actively monitors for other mosquito borne diseases such as yellow fever and dengue fever. Even though neither yellow fever nor dengue fever have been discovered in the County’s mosquito populations, infected travelers can introduce the disease.

While managing mosquitos is by far the most visible program of the Mosquito and Forest Pest Management branch, the team manages many more pests than those that interact with humans.

One of their most well-known programs manages the Emerald Ash Borer (EAB) population. EABs appeared in the United States in the 1990s but became established in Prince William County in 2010. They have become an environmental concern as the immature beetles bore into Ash trees as larvae and disrupt the flow of water and nutrients killing the tree. What most people may not be aware of is that the situation has become so dire that Ash trees have the potential to become an endangered species.

To manage EABs, the County coordinated with the Animal and Plant Health Inspection Service (APHIS) to release wasps that parasitize EAB eggs and larva. “There were two kinds of wasps that were released to help manage Emerald Ash Borers. One species was able to establish itself,” explained Ciro Monaco, Entomologist for the branch. “The wasps don’t harm humans, and while they won’t get rid of all of the Emerald Ash Borers, it will help young ash saplings survive.”

Virginia’s Unique Position and How You Can Get Involved

One point the team at Mosquito and Forest Pest Management emphasized over and over is that they want to protect the natural ecosystem as much as possible. They focus on strategies that are safe for the environment, but the work is challenging. “What makes Virginia especially susceptible to pests is the Commonwealth’s location. We see threats from both the North and the South as species from both regions can survive here,” shared Eli Hosen, Assistant Branch Chief. In addition, development impacts a forest’s resilience as fractured forests are less likely to survive an infestation and are less likely to benefit from biological efforts such as the parasitoid wasps which might not establish in fractured forests.

The staff at Mosquito and Forest Pest Management especially care about bees and other pollinators (some of the mosquito species in Northern Virginia actually feed on nectar) and need help spreading the word about their efforts. Visibility for their branch helps bring awareness to the variety of pests that threaten the County’s forests and encourages residents to help participate in their management. Hosen shared that the team will come out and conduct site visits if a resident suspects there is a forest pest issue. While they cannot use County resources to treat or otherwise resolve an issue on personal property, they can make recommendations and provide resources. The team will also come out to neighborhoods for meetings to share this information and answer any questions residents have.

To get in touch with Mosquito and Forest Pest Management, including arranging a site visit or a community meeting, email them at gypsymothmosquito@pwcgov.org.