Supervisors Sign Off on Summit School and Telegraph Roads Project 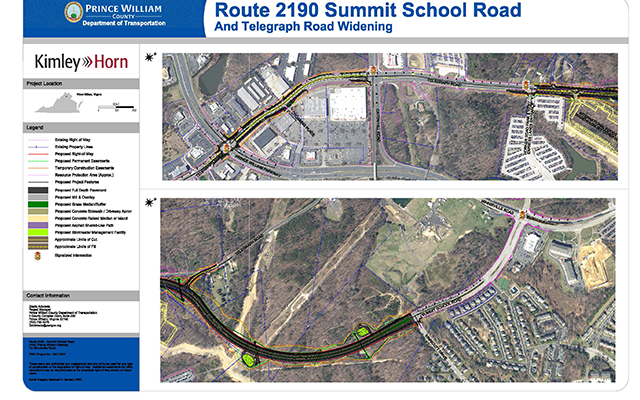 In addition to being pivotal to the Landing at Prince William Small Area Plan, which is meant to spur higher-paying jobs for the residents of Prince William as well more transit-oriented development for more convenient commuting, the Summit School Road extension will increase safety and mobility for pedestrian and cyclists. The inclusion of a shared-use path will enable existing residents to access commuter lots, parks, retail and dining without having to get in car. Read more about the project in the InsideNova article below. Prince William County supervisors have signed off on final design of a $35 million road project in Woodbridge.

The Board of Supervisors unanimously approved the design of the improvement project for Summit School and Telegraph roads after a public hearing during its meeting Tuesday. The project involves a widening of and extension of Summit School Road from Kinnicutt Drive to a new connection with Telegraph Road. The project is funded through the Northern Virginia Transportation Authority’s six-year programs at $35 million.

The new four-lane road would connect with Telegraph Road near the Horner Road Park and Ride lot entrance. The existing section of Telegraph Road would be widened between its intersections with Caton Hill Road and Prince William Parkway. The project also includes sidewalks and a shared-use path.

As part of construction, crews will create a second westbound left turn lane on Minnieville Road at its intersection with Summit School Road. Traffic signals will be replaced and upgraded at the intersections of Summit School and Minnieville roads and on Telegraph Road at Prince William Parkway, Caton Hill Road and the Horner Road Commuter Lot.

One person spoke during a public hearing for the project, but didn’t actually discuss the project.

NVTA’s six-year program ending 2023 includes $11 million in initial funding. The six-year program ending 2025 includes an additional $24 million. The project was part of a November 2019 referendum approved by county voters pushing the board to issue general obligation bonds to finance $355 million in road projects within eight years. The county can request an extension for two years. County staff said the project will no longer be part of the bond referendum because it is funded through NVTA.

Kimley-Horn and Associates is leading the design of the project. Supervisor Victor Angry, D-Neabsco, advocated for speed cameras along the new road to mitigate speeding drivers.

According to the county, the Summit School project will increase access to the Horner Road commuter lot and the Interstate 95 Express Lanes.

County staff expect the Virginia Department of Transportation to sign off on the project in June. Utility relocations are tentatively planned for this summer, with construction kicking off in summer 2023 and wrapping up by fall 2024.Supervisor Kenny Boddye, D-Occoquan, whose district includes the road, said it is “a high-priority project for our district.”

“This will be a key linchpin in making sure our transportation infrastructure and our capacity for traffic is up to snuff,” he said.