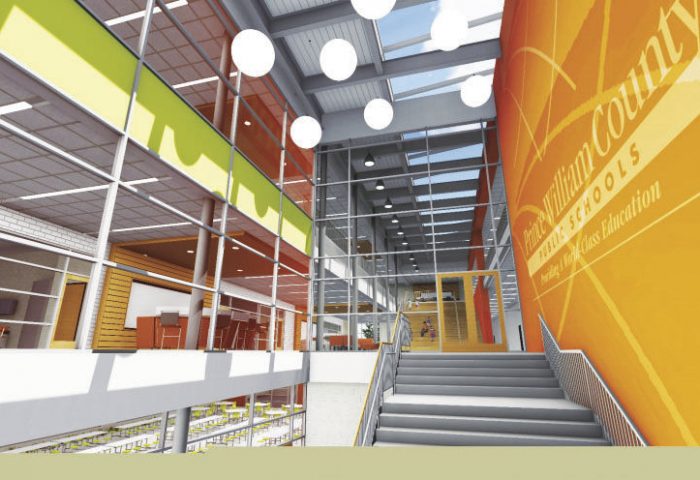 As school officials struggle to find land for new schools, Prince William County Public Schools is going vertical. The school board recently approved the division’s first three-story elementary school. The $37.1 million elementary school at Rosemont Lewis Park will sit on a narrow strip of 19 acres of county-owned land that includes 12.49 acres of the park near Crestwood Drive and Ashton Avenue, just outside the city of Manassas.

School board chair Babur Lateef told InsideNoVa that land near Manassas and in the eastern end of the county is hard to find and expensive.

“It saves space,” he said about the three-story design. “It’s not a sprawling one-story building. ”The design includes a gymnasium and stage separate from the cafeteria, as well as “extended learning areas” for each grade level that will allow for small-group lessons outside of the classroom.

Staff plan to seek construction contract bids for the new school by late fall, and it’s expected to open in September 2022. The school will reduce overcrowding at Ellis, Mullen, Sinclair, Sudley and West Gate elementary schools.Diana Gulotta, the school division’s spokeswoman, told InsideNoVa there are two three-story high schools in the county. The first three-story middle school is planned to be the Potomac Shores middle school, scheduled to open in summer 2021.

On Feb. 19, Albert Ciarochi, associate superintendent for support services, told the school board the prototype design could be used for future elementary schools, such as a proposed elementary school in either Woodbridge or Occoquan and a second Potomac Shores elementary school, both of which are slated to open in September 2023. Ciarochi also said the division can use the design prototype for the Occoquan Elementary School replacement set to be built by September 2025. Ciarochi told the school board the prototype design will help the division adapt to smaller pieces of land that are available.

Gulotta said the division has spent about $213,750 for the prototype design, which allows the same building floor plan to be used several times on different sites with minimal changes. The media center will allow for centralized access between all three floors, with access to small group conference rooms and maker spaces.School board member Lillie Jessie, who represents the Occoquan District, said she loved the design, including the collaborative spaces.“I’m pleased we’re beginning to realize, especially on the eastern end, we don’t have the land,” Jessie said. “We really need to think of a different way — a more vertical approach.”