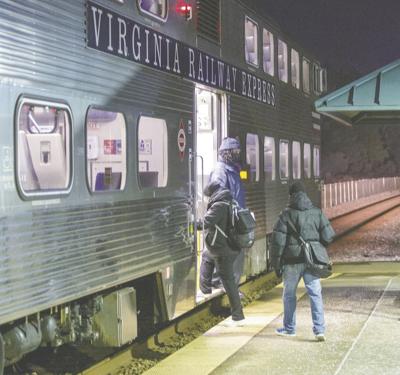 On Tuesday morning, Alex Friedman and a handful of other passengers watched their northbound Virginia Railway Express train pull into the Woodbridge station right on time. He was taking it to L’Enfant Plaza in Washington, where he would disembark and go to his engineering office in the city. On a normal weekday a year ago, Friedman would have been joined by hundreds of other passengers. But as with all other forms of commuting, VRE’s ridership has seen a massive decline since last March, causing the system to run fewer daily trains, and leaving it uncertain about ridership projections over the next few years.

On the current “special” weekday schedule, only 18 trains service the Fredericksburg and Manassas lines, down from 32 before the COVID-19 pandemic. Ridership is about 90% below pre-pandemic levels.

Friedman says the lower ridership (and reduced capacity for every train) has made his morning commute even better. While he used to go into the office a minimum of four times a week, Friedman says he now usually goes in only two or three times, working the rest of the week from home.

“I get my pick of seats,” he said. Asked whether he feels safe, Friedman said yes. “We’re all spaced out and wearing masks.”

VRE leaders hope more people will feel the same way once COVID-19 vaccines have been distributed widely enough for offices to reopen, but they admit they don’t know how commuting patterns might be permanently altered by the pandemic. Even Friedman said he’s not sure he’ll go back to his old routine.

In its proposed 2022 budget, VRE staff acknowledged how little certainty there is regarding future ridership, declining to include a typical six-year forecast of expenses and revenues.

“The projection is intended normally to demonstrate the sustainability of VRE’s budget and to highlight areas of potential risk so that they can be addressed in advance,” said Mark Schofield, the system’s chief financial officer. “Doing a forecast like this at this moment would include highly uncertain estimates on a number of variables, particularly including ridership.”

VRE officials remain confident in the system’s financial health, buoyed by over $86 million in federal CARES Act funding that will be used to plug holes beyond the fiscal year 2022 budget. Typically, VRE has a goal of recovering half of its operating expenses through fares, but in the past year the system has earned just 10% of those expenses back. As a result, VRE used $2.7 million of CARES money to balance its fiscal year 2020 budget and $32 million for the current budget. Next fiscal year, it expects to use just under $25 million.

More federal money could be on the way…